The five year anniversary of Superstorm Sandy is this week. With it comes memories of the ways NYC residents came together to help those most affected, especially when city, state and federal agencies failed. Last month, I experienced artists uniting for a related cause. On September 23 I attended “What’s Up with LIC?” a walking tour organized by the Queens Anti-Gentrification Project in collaboration with Long Island City-based artist Priscilla Stadler and part of the 2017 Queens Arts Intervention.  It was a very hot day, about a month after Harvey hit Houston and a few days after Maria decimated Puerto Rico — Jose and Irma arrived in the interim. As my group was led around the neighborhood, I learned about “hyper-development”, gazing at massive residential buildings in process while artists expressed their experiences of displacement.  I also heard about plans by the city for another huge development near the waterfront instead of a park that would be more ecologically sound in the event of another superstorm like Sandy. I signed a petition for this park to be considered by the Mayor, the Borough President, and other city officials, which you can find here.

At the end of the walk we were asked for our creative response.  I took a photo and wrote a poem: 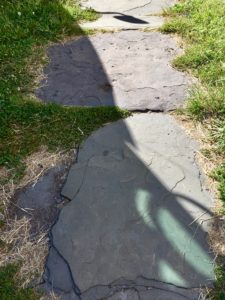 The hyper-development of Long Island City hijacks my memory. Where I once wandered down a post-industrial street to meet a monthly writing group, I now encounter a behemoth of blue, a building of slick glass the color of a waveless sea: a “vertical community.”
To commune is to be one with nature, like the Mespeatches, whose homes were stolen to dirty water. Those who struggle to rent become exiled-in-place, their memories surviving the landscape. Farm-to-store-to-truck, fruit-of-the-earth-stripped-and-packaged, delivered-through-a tin-door-to-table. From the street, the people behind glass treadmill like ghosts, their primal memories erased to blank slate.
At the end of 44th Road near Vernon the concrete sidewalks turn to stone and grass grows among the slabs, like the cliffs of the Hudson River School. This must be an old part of town: the bluestones feel precious as fossils below the mirrored sky. But they were once common, quarried from the Catskills, ripped from the ground just to rest beneath our feet.
Will I one day mourn the behemoth? At some point the cycle will stop or these stones will return to the elements, underwater, memories leached from our bones.