The Fear of Large and Small Nations

I’m currently seeking publication for my recently completed novel “The Fear of Large and Small Nations”, which I began writing in 2009. Inspired by my experiences as a Fulbrighter, the manuscript was honored as a finalist for the 2016 PEN/Bellwether Prize for Socially-Engaged Fiction.  The manuscript was formerly represented by Robert Guinsler at Sterling Lord Literistic.

The Fear of Large and Small Nations Free Sample

Synopsis: Dismayed by the political climate in the U.S. during the Bush years, the main character Natalee (a.k.a. Na), an idealistic, third generation Armenian American woman, flees to her distant homeland of Armenia in order to “give back” by researching and writing about burgeoning social change for women and LGBT people following the Soviet collapse. She soon falls for the much younger Seyran, a bisexual poet and punk rocker who fears his upcoming compulsory duty in the army, known to haze soldiers brutally, sometimes fatally, especially if the soldier is somehow different. The narrative travels in time between Yerevan (2006-7) and Queens, NY (2009-11), allowing Na to reflect on her decision to rescue Seyran through marriage as she struggles to leave him when their relationship crumbles after they move to the U.S. Alternating between the first and third person, each chapter is composed of blog posts, journal entries, short stories, and commentary, ranging in voice and tone — from outspoken and comical to intimate and wrenching — as Na endures an abusive relationship. Infused with references to current events in both countries, the story is set atop a web of traditional values, government corruption and legacies of genocide and violence. This broken love story serves as a metaphor for the complex contradictions that exist between political ideals and personal liberation, in countries large and small, powerful and vulnerable.

Me as her again:

True Stories of an Armenian Daughter 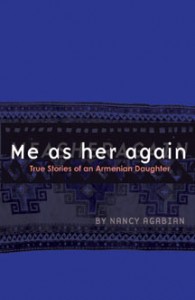 In this memoir, Nancy Agabian tells stories of growing pains, family tensions, and buried pasts. In a narrative that braids together different times and places and shifts between comic and dramatic registers, Agabian tells us how, as a child, she learns to juggle roles in response to competing pressures to fit in as an American while maintaining her Armenian heritage. At home, she struggles with her grandmother’s old ideologies, arguments between her parents, and heated discussions about race and sexuality. In her twenties, Agabian moves to Hollywood and becomes a performance artist and begins to discover herself sexually, dating both men and women. After hiding her autobiographical shows from her relatives, she finally decides to confront her family history and takes a trip to Turkey with her artist aunt, during which she finds she must reckon with painful family histories involving displacement and genocide.

Me as her again free sample: Prologue and Chapter 1

Nominated for a Lambda Literary Award in LGBT Nonfiction

Shortlisted for a William Saroyan International Prize for Writing

…a moving story of self-realization and discovery, a process bound up in the liberating act of relating one’s history and the history of one’s family.

What’s so refreshing about Agabian’s prose is her marvelously open, daring, and honest inquiry into the self. Our “enfant terrible” — she has yet again managed to capture us with her quirky, brilliant stories.

— Shushan Avagyan, author of Girk-anvernagir; translator of I Want to Live: Poems of Shushanik Kurghinian

My favorite song from Nancy Agabian’s improbably vivid “Guitar Boy” punk rock period a decade ago was the genius anthem “I Don’t Want to be a Victim Anymore.” Though as she noted at the time, when you’re a mousily timid, family-mired, Armenian bisexual artist, not tending toward victimhood isn’t all that easy. But you know what? By the end of this splendidly engrossing memory chronicle, she’s pulled it off. She’s no victim. What she is is funny, smart, generous and wise. And she’s my hero.
—Lawrence Weschler, National Book Critics Circle Award Winner, Everything That Rises: A Book of Convergences 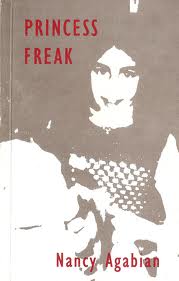 Princess Freak documents through poetry and prose texts the coming-of-age of a shy, funny, bisexual Armenian-American woman who flees the small town of Walpole, Massachusetts to tell the stories of her family. Agabian’s paternal grandmother was a survivor of the Armenian Genocide in Turkey in 1915, and much of the work in the book carries the impact of this devastating event.

She pays close attention to what most of us overlook–in her hands the ordinary explodes into beauty and complexity.