Last Monday, October 24, I had the privilege of standing atop a soap box on the Highline and responding to Zoe Leonard’s magnificent typewritten poem “I want a dyke for President” from 1992.  Among the clouds and the clear wind and the setting sunlight, on a former freight train track with a fancy hotel looming above, it was inspiring to hear artists and activists resist and rebel against U.S. electoral travesties. The Highline repeats this forum again on Halloween, October 31st at 5 pm under the Standard Hotel, more details here.

My response, more of a screed, follows below: 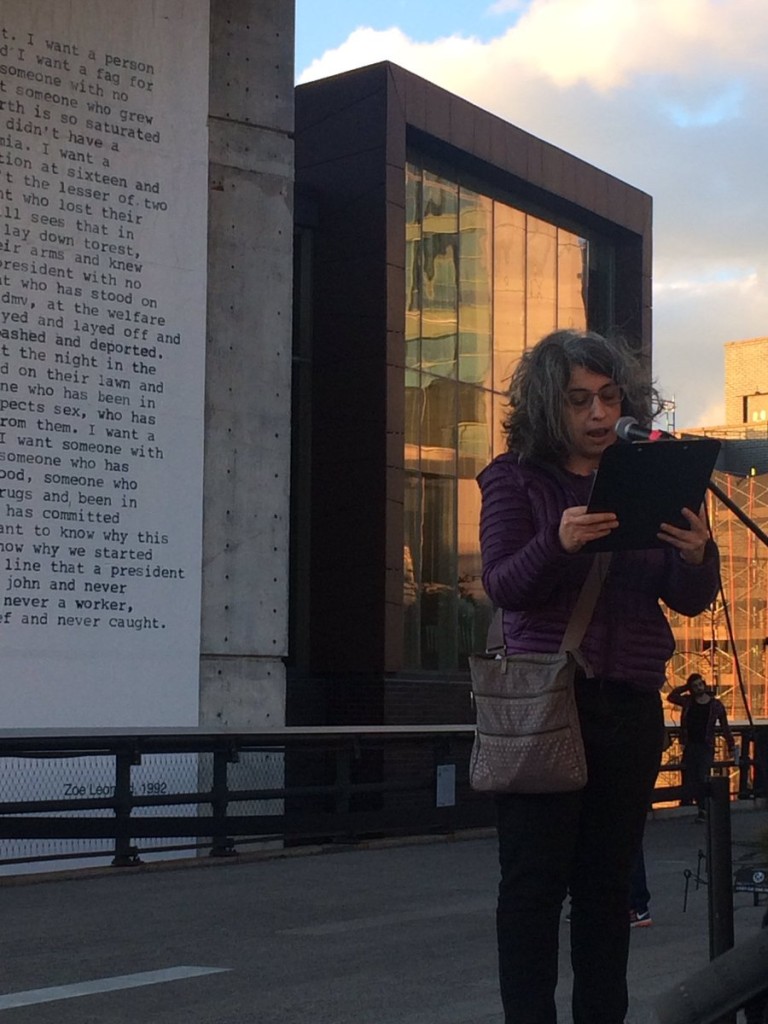 A friend called me one day last year when the primary campaigns were underway and Donald Trump said something awful. “It’s so upsetting,” he said. “I don’t know what I’ll do if he becomes the candidate.”

I told him at that time that I wasn’t going to get taken for an emotional ride, so invested in the outcome of the election, distracted by the media to think it was so important, when there is the congress and the supreme court too, when I could instead become more involved with my neighborhood, my city, my state. I told him how I got so turned around during the Bush elections, so fearful and angry at having such an inadequate person who didn’t represent my ideals running our country, that it brought me to escape the U.S., to flee my life, and I threw myself into an abusive relationship.

Now here I am, months later from that conversation with my friend, and I am so invested again: this time, I see a codependent and a narcissist at the top of the ticket that look like me and my ex. It’s so triggering to see their interactions that I can only respond emotionally and am unable to think about the issues that I care about, such as the United States’ role in the world and the violence we inflict through trade policies and engagement with war. Such as funding for higher education so that me and my adjunct professor friends won’t have to barely scrape by, facing the prospect of suicide as a way to avoid growing old disgracefully.

In the last eight years, I have written a book about leaving an abusive relationship and I have become involved in my neighborhood, my city, my state. I have invested time in caring for and defending my people, queer Armenians. And yet here I am again, freaking out about the presidential election. And you know what?

We all want the same things, really: to care for each other. But we just can’t get them. Because the president is in the way. Because our failures as human beings – to take advantage of each other, to destroy each other – have been built into our democratic system of government. I want to live in a place where it doesn’t feel like I’m living the fiery end game of the capitalist experiment. In order to get to that place, perhaps all I can do is resist the experiment. To find a way to not be its subject.

As an artist, I don’t want the arts to have to pick up where civil society and social services fail. The government used to fund art: now private foundations and corporations have picked up where they left off. And social practice art is the hot new funding topic, asking artists to improve their communities —  so artists are now doing the jobs of social workers. But I want there to be enough social workers so that artists don’t have to do their jobs, too. I want my artist to speak the truth, to hold up a mirror to society to jar us from escapism and media-induced delusion. I want artists’ first priority to be expression. But artists are so muzzled by the demands of funding that they can’t even emote during a time when hate speech has reignited the genocidal tendencies of our nation.

I don’t want our country to be a failed capitalist experiment, like a broken down Atlantic City casino. I want my president to have a vagina as much as the next person, but that doesn’t mean we can relax when Hillary is in the White House: we will need to tell her how we want our place in the world to be peaceful: through protest, but also by how we resist the system, by how we act, and make art, and care for one another, in our neighborhoods, cities, states, and our lives.

Note: because of the limits of nonprofit status of the sponsoring organization, I couldn’t mention any candidates’ names in my performance, as I have here on my blog.

3 thoughts on “I don’t want a president”